I always like to have dessert on hand when I have guests over this past week when I was cooking our turkey dinner to celebrate Christmas holidays we actually had our turkey dinner on boxing day I wanted to make a delicious but very easy dessert recipe and typically when it’s frightfully cold outside I turn to comfort food.

I love baking with apples, and often try out vintage recipes, like our Apple Pandowdy! We also use this same basic pie crust recipe to make our delicious cinnamon roll pie crust on our famous Dutch Apple Pie!

One of my favorite recipes to make is apple crisp. I don’t even look at a recipe anymore as I’m able to just make it up as I go along! Typically I use a traditional apple crisp topping and that’s brown sugar flour and lots and lots of melted butter but I had some leftover pie crust in the freezer that I wanted to use.

I’ve been seeing on Facebook and social media lots of posts about the cinnamon pastry pie crust that folks are using with their apple pies .

So what I’ve come up with is Cinnamon Swirl Apple Cobbler – like an apple crisp that has a cinnamon swirl pastry topping and oh my gosh it is so yummy.

Full of apples and cinnamon and butter and brown sugar it’s just too good and the smell of it baking is to die for.

To get started grease your pan really well.   I use glass baking pans as I like the way they cook my desserts.   Prepare your apples the same way you would for a traditional apple crisp.  So in this case I had McIntosh apples on hand and they were little on the small side so I used ten because I love to pile the apples up high in the pan.  They always shrink down when they cook. (you can see a little tip about hMom’s Apple Pie | The Ultimate Comfort Foodow to keep your apple pie filling from shrinking away from your pie crust if you go to this link I’ve instructed my students on this for many years and it’s a great tip.)

Once you have your apples peeled and cored, and I must buy an apple peeler they are so much fun and so easy to peel apples with!  That’s the biggest job about making any baked apple dessert right? But in this case I used my Apple slicer and just peeled the apples.

So I add a cup of white sugar, a teaspoon of cinnamon and a quarter cup of cornstarch or flour (which ever you have on hand is fine) and the purpose of this is just add a bit of thickening so that your apples and don’t run all over the place!  We want a nice thick serving of cinnamon swirl apple cobbler.  I renamed it to a cobbler because now that we don’t have the crispy crunchy topping, I don’t really feel that we can call it an apple crisp.

So now we have the fun part. My pastry has thawed and I’m going to roll it out into a large rectangle almost the size of a pie crust or a pie shell that you would need, so I would say around 12 in  You can see I’ve use my pastry mat and if you don’t have a pastry mat please do yourself a favor and get one they’re so helpful when rolling out pie crust.

Using a pastry slicer or a pizza cutter slice the roll into individual slices that are about  a quarter inch thick and lay the slices on your pastry mat.    I just flatten them with my fingers, I think that makes it easier for us to handle them, just make sure your pastry mat is well flowered so that these lovely little cinnamon swirls don’t stick to the mat.  Cover your apples with these cinnamon swirl pieces, and make sure it’s all tight and fully covered.  Don’t worry about the apples not having a chance to breathe cause there’s lots of little nooks and crannies in the top.  You can see that so the steam will be able to get out .

I brush the top with an egg yolk mixture because that helps the pastry to achieve that beautiful Golden Glow that we want. And then I put it in a preheated 350-degree Fahrenheit oven and bake for 35 to 45 minutes.  Now I have a fast oven and so I typically put it in for the  lesser time and that way I know I’ll be safe.  If I need to add 5 or 10 minutes at the end, I’m ok to do so.

While your Cinnamon Swirl Apple Cobbler is baking, you can mix up some glaze using icing sugar and water.  For this recipe,  let’s use a cup of icing sugar or powdered sugar and put it that in a small bowl.  Add one to two tablespoons of water, and mix well.  It takes very little water to make a nice thick icing sugar glaze.   Once you make that up put it aside until your Cinnamon Swirl Apple Cobbler is baked and let it cooled on a cooling rack or a large cutting board for about 15 to 20 minutes.   Then you can drizzle that lovely icing sugar glaze all over it and it has the look of a cinnamon buns!

So that’s it.  Pretty easy and it was so delicious!  We had our boys for dinner that night and they just ate it all up with big scoops of vanilla ice cream!  Of course we got to have leftovers 🙂 that’s the best part of cooking a big dinner!

I hope you enjoyed this recipe and look forward to seeing you on the blog. 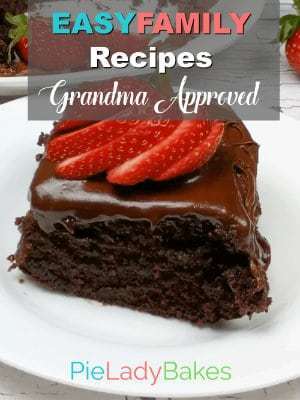 We all love EASY right?

These recipes will put a smile on everyone's faces!

Success! Now check your email to confirm your subscription.

Hi there, I'm Judy, it's awesome to meet you! I'm a writer, master pie baker and I've been helping people reach their personal and career goals for over 30 years.   I believe everyone should experience the joy of creating old fashioned recipes, just like Mom or Grandma used to make. And I also help you to create those memories for you and your family with Simple, Delicious, Wholesome recipes that you can learn to make. We also help you discover that Simple Living isn't just a concept.  It's a state of mind. Comforting food and Simple Living. It's all here. You can read more on my About page!

[…] Cinnamon Swirl Apple Cobbler from You Can Live Rich On Less […]